Excellent training for the whole body with adaptive motion control: Self-powered or with the use of an electric motor powertrain.

The PhilPaso Training Maschine was developed by Dr. Klaus and Sabine Berndsen and is based on the patent number 196030315. The patent contains a hinged pedal system for training the rolling movement of the feet for walking and running.

Excellent training for young and old 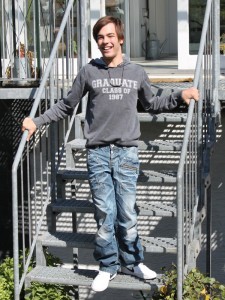 The name PhilPaso is a neologism and means the way of Philipp.  Philipp is the son of Klaus and Sabine Berndsen.  He was born with Cerebral Palsy in 1991 and would never (from expert opinions) learn to walk.  The boy took part in countless, extensive and unsuccessful treatments in Germany and other countries over a period of many years.  Instead of resigning to the fate that their son would never be able to walk, Dr. and Mrs. Berndsen began the development of a special training devices to create complex walking motions and patented their mechanisms.  After intensive training with the devices, Philipp was able to take his first independent steps when he was nine years old.  Using their experience as a basis and the patents of their devices, the Berndsen’s gradually created their best training device.  They called it PhilPaso because the device helped their son Philipp learn how to walk.

Meantime countless other patients were able to profit from this method.  Due to the prior high costs of development, it has only now been achieved to create a durable device for professional use which does not need constant technical adjustment.

Dr. Berndsen/Berndsen define their trainings methods, which are important for the principles of brain-coordinated body functioning (neurophysiological principles):